The material is the machine

A shape memory alloy can be deformed in a cold state and automatically returns to its "shape memory" state when heated.

One material with two faces

Even more function in less and less space - this is the challenge faced by different industries. memetis enables space-saving and powerful microactuators by using specifically structured thin films of shape memory alloy (SMA). A shape memory alloy (SMA) is also known as a smart material or memory metal. This is due to their ability to "remember" their original shape. Actuators are components that perform a movement or action in the smallest of spaces. memetis thin-film actuators exist at unequal temperatures in two different crystal structures and "remember" an earlier shape even after strong deformation. A shape memory alloy is thus a metallic alloy that can easily be deformed in the cold state, for example by pressure. However, as soon as it is heated, for example by a current pulse, it returns to its original state, to their "shape memory" - the so-called shape memory effect. The forces involved can be used to control the movements of very small components. memetis GmbH uses this behaviour for its work.

In diagnostics and analytics, there is a trend towards miniaturisation and increased portability with a constant or even increased range of functions, particularly in the field of microfluidics. So-called lab-on-a-chip systems are designed to enable complex analyses in the smallest possible space - smart, handy and decentralised. memetis GmbH focuses on making such a system even more intelligent and available for a broad spectrum of applications by using foil-based miniature actuators made of shape memory alloys in the form of miniature valves and miniature actuators. However, applications with similar requirements for component compactness can also be found in the field of automation technology, e.g. in robotics.

Shape memory actuation is our core competence - we are happy to assist our customers and interested parties with any questions they may have. If you are further interested in the shape memory effect and our work, please refer to the following publications: 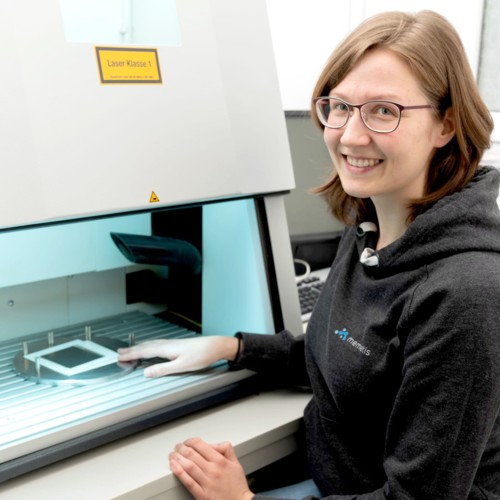 Please update your browser version so that this website can be optimally displayed.